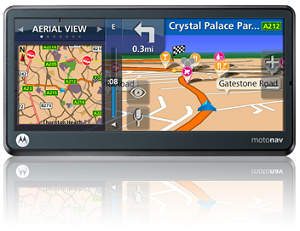 The latest of the Motorola‘s GPS systems features a cinematic touch screen display which they made shorter but wider which fits more strategically on cars for more navigation convenience. It has great resolution with high-definition graphics with 358×854 pixels and a built-in internal antenna.

One of the most updated features found on the latest Motorola GPS technologies is the hands–free speaker phone which enables the user to call and receive calls from their compatible mobile or cellular phone unit without tampering the driving experience with the use of the built–in microphone and Bluetooth.

Motorola‘s GPS system give its users the privilege of streaming traffic information on various streets and routes which is one of the most essential and useful features a GPS technology should have.

The feature of voice recognition is present Motorola‘s GPS units which enables the user to give verbal commands. This is an ultimate driving convenience provided by Motorola.

GPS unit of Motorola comes with a rechargeable battery which can last for two and a half hours of continuous use and can be recharged on and off the vehicle.

Motorola‘s Global Positioning Systems units have a built-n Bluetooth used for hands‹free calling and audio/video purposes and other connection purposes. Its satellite connections forms the main purpose of the unit as it performs the navigational purposes of it

Motorola made sure of an ultimate driving experience by ensuring audio/video proficiency in all its GPS units aside from its known navigation expertise. High–definition screen display with the great screen resolution adds up for a clearer screen a video view.

This is one unique feature present on Motorola GPS units, it allows users to search on traffic and weather updates as well as movie and music reviews and retrieve data from the internet with the help of the built–in Bluetooth.

The technology‘s combined QWERTY keys which are soft and easy pressed plus its user friendly touch screen keys match with the very useful voice command makes the ultimate convenience in every driver‘s road trip.

This is the core feature of Moto‘s GPS technology. With the help of the other features, Motorola‘s GPS provides drivers with the most accurate traffic streaming information on different routes and streets as well as reliable data of the flight status, latest fuel prices and safety camera alerts. Furthermore, extra features include: